The facts about Trump’s policy of separating families at the border.

Obama’s guidelines prioritized the deportation of gang members, those who posed a national security risk and those who had committed felonies.

Trump’s January 2017 executive order does not include a priority list for deportations and refers only to “criminal offenses,” which is broad enough to encompass serious felonies as well as misdemeanors.

Because of Trump’s executive order, DHS can deport people for misdemeanors more easily, because the government no longer prioritizes the removal of dangerous criminals, gang members or national-security threats. (A DHS fact sheet says, “Any individual processed for removal, including those who are criminally prosecuted for illegal entry, may seek asylum or other protection available under law.”) 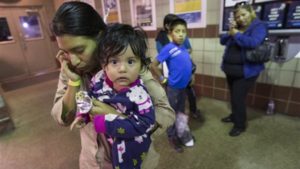 Where are the children coming from?

3) Rival gangs are responsible for most of the murders in El Salvador’s capital.

More than three-quarters of the children minors are from mostly poor and violent towns in three countries: El Salvador, Guatemala and Honduras. Children from Mexico, once the largest group, now make up less than a quarter of the total. A small number come from 43 other countries.

Permanent link to this article: https://santamariademocrats.info/2019/07/19/the-facts-about-trumps-policy-of-separating-families-at-the-border/