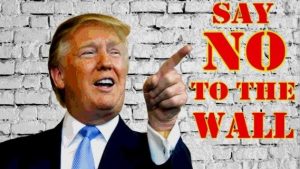 Trump will stop at nothing to appease his racist and bigoted base. Trump is willing to shut down the government if Congress doesn’t pass his ridiculous demand that a costly and unwanted wall be built along our Mexico border.

The number of undocumented immigrants entering the United States has steadily declined since the turn of the century. There is no way to track these numbers exactly, but most studies estimate that in 2016, less than 1/4 the number of undocumented people entered the country than in 2000. Those who are coming here should be welcomed, not stopped by a giant, expensive, taxpayer-funded wall.

American Immigration Council conducted many studies to track crime rates among immigrants, both documented and undocumented. According to a 2015 report, immigrants overall are less likely to commit crimes than native-born Americans. Trump’s lies cannot be tolerated – even his claim that Mexico would pay for it is a lie, given he is already arranging for federal funds to be dedicated to its construction.

This wall would do nothing but create issues with our international relationships, become costly for tax payers and will never become a permanent solution to this issue.

Permanent link to this article: https://santamariademocrats.info/petitions/immigration-and-daca/tell-trump-no-wall/