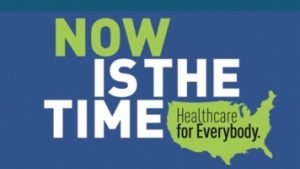 The Senate Trump “Care” Bill was even meaner than the House Bill.  We have to keep up the pressure to push public opinion into the offices of our elected officials.  Call, write, fax, rally, talk about health care as a right that all taxpayers are entitled to, not just the wealthiest Americans.

The Affordable Care Act may be temporarily safe from GOP attack, but it still has problems that need to be solved, and Republicans will continue to chip away at the negatives to pass their own devastating bill.  Democrats suffered in the 2016 election because they didn’t address and fix the problems.
It’s time to make sure all Americans have truly affordable access to the health care services they need and deserve — by implementing a Medicare for All, single-payer health care system.

Even if the ACA remains intact under Trump’s Republican Party, the Congressional Budget Office predicts that 28 million Americans will remain uninsured, a disproportionate number of whom are people of color. And millions more will continue to struggle with sky-high deductibles and co-pays that they can’t afford.
Some Democrats claim that a single-payer system is politically impossible. But recent polls show that the fight over Trumpcare has actually increased support for government taking a more active role in the health care system.

A new Pew Research Poll out this week found that 60% of Americans think that it is the responsibility of government to guarantee affordable health care for all Americans, including a stunning 56% of GOP voters who make less than $30,000 a year. Embracing universal coverage wouldn’t just be the right thing for Democrats to do — it would be a smart way to win new voters and build the majority we need to defeat Donald Trump, all while remaining true to our values.

Democrats have a choice to make. They can do the bidding of corporate donors, or they can offer voters a real alternative that would provide universal access, reduce consumer costs and create a healthier country for everyone.
Health care is a human right.  Thanks for pitching in to push for truly universal health care coverage!
– Karli Wallace Thompson, Campaign Manager
Democracy for America

Permanent link to this article: https://santamariademocrats.info/petitions/healthcare/medicare-for-all/