Return to Other Local Political Events 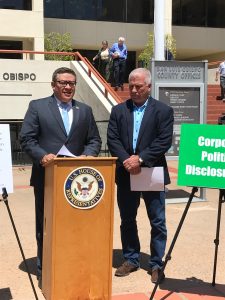 The presentation was held at the SLO County Courthouse Plaza, 1050 Monterey St, San Luis Obispo, beginning at 12 Noon. The press conference open to the public.

Since Citizens United, undisclosed spending in campaigns has increased dramatically.   According to the *Center for Responsive Politics, special interest groups spent nearly $1.5 billion on the 2016 election. Super PAC spending nearly doubled over the same time period, going from $609 million in 2012 to $1.1 billion in 2016.

Additional Note added by the Democratic Club of Santa Maria Valley:    Billionaire brothers David and Charles Koch, whose influence can be seen in some of the individuals Trump has chosen to help run his administration — Marc Short, for instance, named to be White House legislative liaison, has long worked with and for the Kochs — helped bankroll Citizens United when it was founded in 1988.

Permanent link to this article: https://santamariademocrats.info/past-local-political-events/may-2-2018-carbajal-and-ostrander-announce-legislation-to-disclose-corporate-election-spending/

General club meetings will be conducted on ZOOM as of Thursday, August 19, 2021.  Meetings are held every third Thursday of the month at 7:00 pm.  Members will received an email link (or on the newsletter) to join the Zoom meeting.