Trump signed away your internet privacy. A California legislator wants to give it back.

FIX-IT Healthcare at the Tipping Point

As the Single-payer bill heads to the state Assembly, big pharma wants to discourage us with this….SACRAMENTO — As a legislative deadline loomed, California senators Thursday — in some cases, reluctantly — voted to pass a $400 billion plan to create a government-run health care system without a way to pay for it. 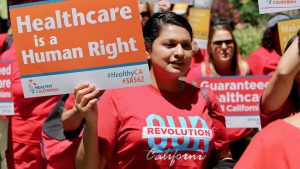 As the single-payer bill heads to the state Assembly, this is exactly the media message that the private insurance and pharma industry wants. And it’s utterly, completely, embarrassingly inaccurate.

With single-payer, the cost would drop to $331 billion — meaning the people and businesses in California would pay $37 billion less than they are paying now for health care, a new study shows.

Permanent link to this article: https://santamariademocrats.info/2017/07/01/big-lies-about-ca-single-payer-healthcare-begins/